The best driven partridge shooting in the country!

Let us organize your summer Holidays!

Arrange a great big game hunt and a memorable visit to Spain!

A marvellous example of a monumental square with portico, showing unity of style and grandeur of design, it is one of the most beautiful of Spanish squares. it was built in the 18th century, in the Baroque style, with porticoes formed by rounded arches supported on solid columns. Above them rise three-storey mansions with austere iron balconies. From between these balconies not very prominent pilasters rise up to the roof. The spaces between the arches are decorated with medallions.

The Ayuntamiento (Town Hall) is the centre of interest, as far as decoration is concerned, with typically Spanish ornamental motifs.

Founded in 1103 by Martin Fernandez, its construction lasted throughout the 12th century. In it we can discern the beginning of the Salmantinian Romanic style. This church, surrounded by modern houses, encloses sepulchres of great value.

This mansion could be considered the most representative civil building of the art of the era of the Catholic King and Queen. As in the culture of our 15th century, within this house can be seen to blend together Gothic, Moorish and Italian influences. its founder was Dr. Rodrigo Arias, chancellor of the Orden de Santiago (Order of Saint James), hence the use of the shell, symbol of this order, as an ornamental motif.

The windows on the ground floor are protected by exquisite bars which have been referred to as: "the most beautiful of Gothic Spanish ironwork". The patio is one of the most typical of Spanish cloisters. Of great interest is the staircase, covered by a coffered ceiling of Italian influence.

This monument - one of the most beautiful and grandiose of Baroque architecture - was built thanks to Queen Margaret of Austria, wife of Felipe III. Designed by the great architect Juan Gómez Mora, the first stone was laid on 12th November, 1617.

It is not possible to fully appreciate the magnificence of the façade. The towers are some of the most beautiful in Spain of the Baroque style.

In its interior the church and its altarpieces stand out, as do the Baroque patio and diverse works of sculpture.

According to a royal decree, drawn up in Valladolid on 16th April, 1243 by Fernando III, Alfonso IX, King of Leon, was he founder of the Salmantinian School. This University, one of he oldest in Spain, was established only a few years after those of Bologna and Paris.

It is one of the most representative monuments of the Spanish Plateresque style, the façade being the most beautiful expression of this style.

Floral themes predominate and there is a dominant Italian note in the sculptures. The moulding and the panels include masks, fruits, children, baskets, etc.

The staircase within the University, one of the artistic treasures of Spain, consists of several flights whose decorations represent the "spicy" medieval skill, the happiness of married life and scenes of games, tournaments and bull fighting on horseback. As far as dates go, we know that the decision to knock down the old staircase and start building this one was taken in 1512.

The librasy is closed off by a beautiful iron gate from the 16th century. The old library collapsed in 1664 and was rebuilt in 1749 by the great architect Manuel de Lara Churriguera, who is also the author of the rich Baroque bookcases full of rare and exquisite books from all the faculties and a Baroque cupboard where the manuscripts are kept.

Built during the 16th, 17th and 18th centuries, it is one of the last manifestations of the Gothic style. Its great height makes this cathedral one of its most famous examples.

On the outside, this cathedral presents the attractive organisation of the final Gothic period. The overall impression is one of grandeur due to its height and spiritual, ascendant feeling with luxuriant ornamentation which throw into relief the main façade and several doors: Obispo, San Clemente and, on the northern side, Ramos and Crucero.

In its interior the decoration is rich and elegant. The dome above the high altar is sumptously golden and polychromatic, the painting is the work of Juan Montejo. The choir situated in the main nave is by Alberto Churriguera. The Plateresque organ was built in 1568 by Damian Luis and the Churriguera organ dates from 1745. 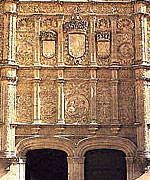 The Old Cathedral is one of the eminent monuments of Romanic art. Planned and started according to the purest canons of this style, it represents the extreme grace of the Romanic column. It dates from the 12th century. The Torre del Gallo rounds of this cathedral with its double windows and its strong ribs.

Worthy of note in the field of sculpture are the sepulchres of the 14th and 1 5th centuries and in that of paintings, the decorations of the sepulchres and of the chapel of San Marin are a very pure example of the 13th century style of French influence.

Behind the cathedral can be found one of the cosiest corners in Salamanca, the patio Chico, formed by semicircular apses.

From here can be seen the dome, called the "Torre del Gallo" (Cock Tower) because of the shape of its weather vane, derived from Byzantine and Aquitainian influences.

The sepulchres to be found here are memorable, the most sumptuous of all being that of its founder, in alabaster, situated in the centre of the chapel. This sepulchre is surrounded and isolated by beautiful iron railings, perhaps the most notable of those to be found in Spain. The organ, from the second half of the I5th century, has a ledge of Moorish design.

it formed part of the Roman Calzada de la Plata, which united Merida and Astorga and is supposedly from the times of the emperor Vespasiano. Only the fifteen arches closest to the city are Roman as the other eleven have undergone various reconstructions, the last being in 1677. Near the bridge can be found an Iberian "verraco" (statue of a bull), representative of pre-Roman Salmantinian art. 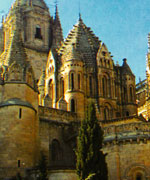 The church was begun in 1524, the architect and director of the building being Juan de Alava. Its main artistic interest radicates in the facade, whose ornamental details shine and vibrate in the sun's rays.

The portico of the convent is one of the purest examples of Renaissance architecture of the last third of the 16th century.

Tradition has it that Christopher Columbus discussed his theories about the route to the Indies with the Dominican monks. Well-known is the favourable welcome that he received and the encouragement not to give up in his venture, especially on the part of the prior, Fray Diego de Deza, which is why the discovery of the Indies is said to be due to Fray Diego de Deza and to the Dominican monks of Salamanca.

This tower is an example of the Salmantinian belligerency of the Middle Ages.

It has a square base, becoming eight-sided higher up. It was probably built by Francisco Sotomayor. 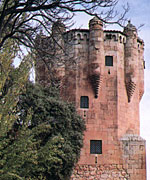