The best driven partridge shooting in the country!

Let us organize your summer Holidays!

Arrange a great big game hunt and a memorable visit to Spain!

This palace is the most popular of all the Spanish civil architecture of the Renaissance. It remains as a prototype of a noble's house of the Spanish Renaissance, although what exists is a quarter of what it could have been as only one wing was built. It is one of the most representative works of the Spanish Plateresque style, dating from 1539 and belonging now to the Duke and Duchess of Alba.

Named after the Archbishop Fonseca and later after the Irish, this college unites the most select of the Plateresque architecture, It was begun to be built in 1527 and of most interest are its façade and the patio, full of grace.

The church is of the Gothic type from the period of the Catholic King and Queen and in its interior can be found an altarpiece by Alonso Berruguete.

Founded in 1512 by Alfonso de Fonseca, this convent is found in one of the most beautiful and evocative spots in Salamanca. The church is Gothic in style with one nave and vaults of star-shaped and apsidal criss-cross.

Of interest is the niche decorated with medallions and columns of art by Diego Siloé. This church has 2 choirs: the main one is surrounded by a rich Gothic railing while the secondary one contains two sets of panelling with several paintings from the 16th century.

This is an interesting example of a circular Romanic Church, founded in 1178. It seems to be one of the defensive round turrets of the gateway to Zamora.

It contains an attractive statue of the Virgin from the 16th century.

A typical construction of a 16th century Spanish church, its structure is Gothic although its decoration is of Italian influence.

Of interest is the lyrical altarpiece, the statue of San Rafael and the choir.

Founded in 1107, in the Romanic era, it conserves its towers and the northern doorway.

The interior of the nave is of the Baroque style, except the ceiling of the chancel.

An old private mansion in the modernist style, today restored and belonging to the Town Hall.

It' s now a Museum of art nouveau and art decó. 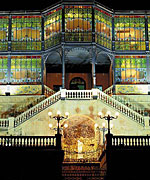